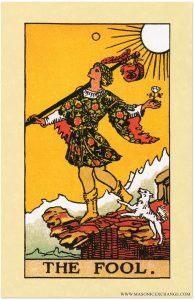 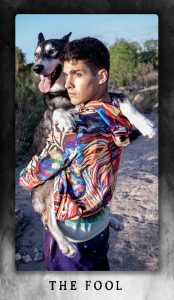 “The Fool” was the first card created for Zen Monster Tarot. (“Let us start at the very beginning, a very good place to start.) Studying the traditional card, I went through my catalogue seeking images of people with doggos: Young man in colorful clothes with a dog at his feet. Using Conri, instead of some tiny dog seemed ironic and funny. But the more I researched the card, the more I kept coming back to an image of Jaime Rodriguez holding Conri protectively while Conri gazed off into the distance, a little oblivious. (His natural state.) In this case, the Fool is the dog, and his human companion is his protector. The reversal intrigued me, and opened my mind to consider unusual interpretations as I created the rest of the deck. Other details fell into place. In the traditional, there is a knapsack on a stick by his head. In the photo, he has a hoodie, which is about the same thing. This image became the basis for “Fool’s Journey,” a novella I wrote exploring the relationships among the Major Arcana. I named the human Yew, and off I ran.

Recently, I found out that life imitated reality. Jaime and some friends were on top of a building, looking down at the ground far below. Curious to know what his human was observing, Conri made a running leap over the hip wall. Jaime grabbed him mid leap, airborne, and brought him to safety. Good human. 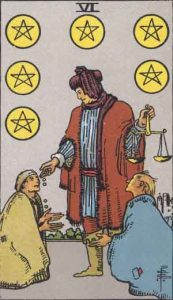 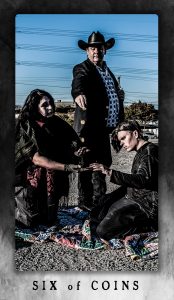 My Alfred Hitchcock moment. The only place I appear in the deck. I had planned on using someone else for this shot, but for some reason they backed out. I’ve gained a lot of weight in the last couple of years, thank you Rona, and hate the way I look. But, well, this is me. As always, it was a joy to work with Sin (Jose Viruet) and Minx (Cyndi Lopez) two best friends who are perfect for this card.

When I arrived that day, planning on shooting two cards, the location had completely changed since my last visit. The wall that played home to a mural of the Riverwalk had been completely removed, and a formerly ratty area had been dressed up and made pretty. Then, just as Sin and Minx arrived, my camera refused to shoot. I was new to it, and so hadn’t worked out all the kinks, but seriously? It wouldn’t shoot at all? Just as I was about to call the shoot, a lightbulb went off backwards in my head and something I had seen online made reverse sense from what I thought it meant. I don’t even remember what was set incorrectly, I just remember thinking, “Seriously, and that renders the camera inert?”

The shoot was terrific, and Minx bought drinks afterward. It was really a lovely day. I had worked with both friends before, but that was really the first time we just sat and chatted. That was my favorite part of the shoot, out on a patio chatting with friends. 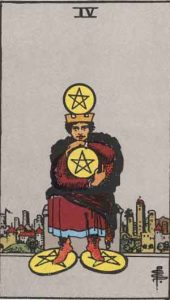 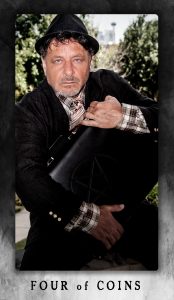 Reshoots, part 1: I shot Nikos Kourtis TX Realtor for the Four of Coins and was happy with the results. (First card.) After the shoot, he did some more research into the card and asked if we could reshoot. He had a deeper understanding and wanted a chance to improve his expression. I thought it was great that he was so dedicated to his craft that he offered that. So the third card is the final result. Much better, in my opinion. Thanks Nikos! The middle card is the traditional Smith/Waite deck so you can compare. 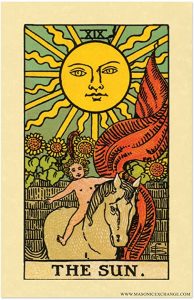 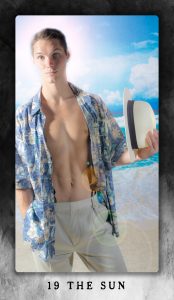 When I first decided to play with tarot cards, it was to stave off the boredom of isolation when San Antonio shut down for the Rona. Since I often work with the same sorts of archetypes (big symbolic concepts) that the tarot uses, I’d likely find at least a few images in my catalog that would work as cards. Sometimes, it took a few tries to decide on the image that fit the best. I threw all of these out to the FB Hivemind to get opinions.

In this case, the card was the Sun. IMHO the traditional card (image one) had some extremely abstract symbolism that would annoy newbies to tarot and which, IMHO, didn’t really add to the meaning of the card since every explanation I read told a different story for the details. The general concept was almost always identical, but when it came to the more abstract symbols, everyone seemed to have a different opinion.

Also: naked baby and horse. Not something I could do.

I tried three options. One was very abstract (the sunflower statue), one rooted itself in a more sensual connection to the sun (with Steven Mayen) and the third was an attempt to merge the various symbols in a meaningful manner (with Nathan Goss. )

Support for the third was overwhelming and brought it to the final deck.

I recently had two professional tarot readers tell me they thought the energy of the card was perfect. Good enough for me. What do you think? Did I pick the right version? 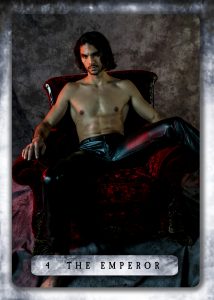 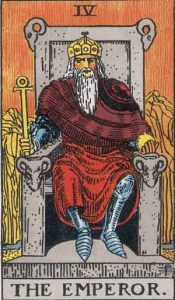 So…… creating the tarot deck was a huge learning process for me as an artist. I completed the entire project in 6 months. (So I guess there was a silver lining to the pandemic: lots of free time to create a tarot deck.) At first, it was kind of a lark, something to do to stave off boredom and loneliness, and I used existing images from my catalogue. I often play with the same archetypes as the tarot, so it made sense.

Well, image one is the traditional card for the Emperor, and the second image, a shot of Wesley De La Rosa I’d taken a couple of years ago seemed a perfect fit. One of my most appreciated images, it even graced my marketing materials.

However, after averaging two to three shoots a week to create new material for the deck, I wondered if the original image truly represented the best of my work.

Hesitantly, I asked Wesley if he would mind coming in to reshoot the image. I mean, what if he spent all the time and energy to recreate the shot and it wasn’t any different? I mean, dudes a pro… I’d hate to waste his time.

He’s also a super cool dude and agreed without hesitation. Thanks, Wes! 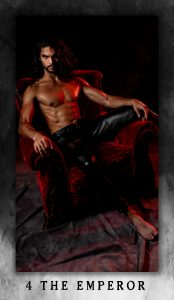 Looking at that image, I think you’ll agree it was worth the reshoot. I can’t count the number of folks who have been glancing through the deck, reach that card and stop with an “Oh my God.”

Shooting two to three times a week for six months creating some of the most creative images I had ever produced? Priceless. 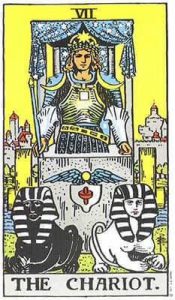 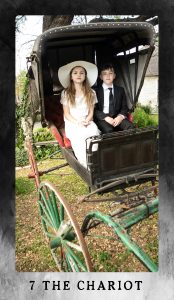 I started creating the Zen Monster Tarot deck kind of by accident during the shut down. At first, I used existing images that sort of struck me as meaningful for some reason. When I decided to complete a deck, I returned to many of these cards fully expecting to replace them with new, deck-specific images. Sometimes, when I looked more closely, I decided to keep it.

Originally, I liked the idea of moving the sphinxes into the drivers’ seat. In the modern era, we are the one’s behind the wheel, and no one pulls it along. Then I noticed that in both images, the female is white and the male is black. Huh. Then I noticed that the canopy in the original is covered in stars, and the canopy in my photo has bright shiny spots of light. You get a glimpse of a house in the background in my image, and if you look closely, there is a red spindle on the rear wheel of the buggy, and a statue of an angel directly above it.

I took the photo a full year before thinking of making a tarot deck. I’ll point out other cards with fun “coincidences” in future stories.

Let me know if you notice any other similarities here!

Oh, models are Eirik Sutton and Eliza Sutton. They have FB accounts now so I can tag them. Hi folks! 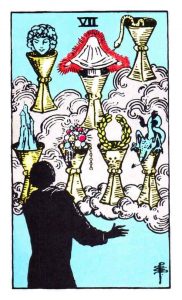 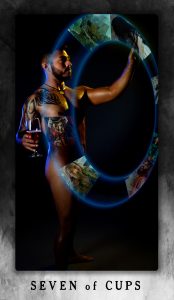 The Seven of Cups was by far the most difficult for me to reimagine for Zen Monster Tarot. It was also close to the last, if not the last card I created. In a funny little detail I likely shouldn’t admit, I’d already written the description for the manuscript based on my best idea before inspiration struck.

So, the guy has a vision of choices in a cloud of fog. At first, I thought maybe have someone hitting a hookah and, you know, hallucinating. I wrote the description based on that image. If you have “the Words,” you’ll get a chuckle.

Then it hit me. I’d used the idea of a holographic screen before. Why not have someone making choices on a screen? It’s as ephemeral as images in the fog. I got excited. I chose images from past shoots to represent the images on the card, going for a similar symbolic value more than recreating the image. For me at least, the red glow around the shroud sets that image as the choice they have made… but what have they chosen?

I had several shots of a shrouded woman from a prior shoot, because of course I did! I had worked with Henry Laque before and thought he’d be great for the card. He has a very positive, inquisitive vibe. It all fell together.

I don’t always use the specific number of objects implied by the card. For one thing, the way I designed the deck, every card is labelled. Even if every card had the exact number of objects, sometimes they are intentionally obscured, and I didn’t want readers playing “Where’s Waldo?” In this card, the glass of wine Henry holds creates the connection to cups. For another, some of the cards in the traditional deck seem overburdened by the need to force irrelevant objects into the image.

Today’s reading. I’ve had this weird experience lately that the world has been strangely quiet, almost expectant. You know, like in a movie when two people walk through the woods and you hear the birds and the wind, and their talking and then person one puts their hand on the other person’s arm.
Two: What?
One: Listen…
Two: I don’t hear anything…
One: Exactly…..
And then something superhuge either kills them or gives them a dragon.
A friend suggested I ask the cards what’s going on…
What do you see in the answer? 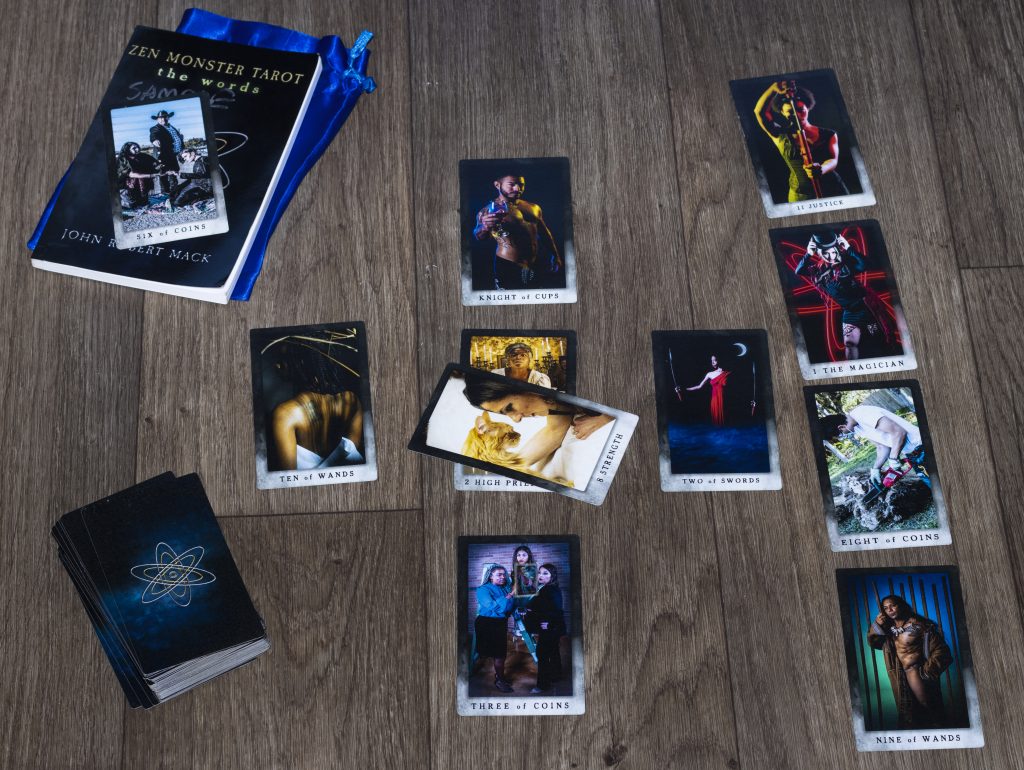 Tarot wine. (It’s too late for coffee.) This is the kind of reading I get when the universe is mocking me for asking a question whose answer I already know. Sometimes I get kind reassurances, sometimes, I get “You’re a drunk and a fool, and you already knew that.” Keep in mind that in many ways, I see this as a positive reading….. but the universe just needs to give me shit. 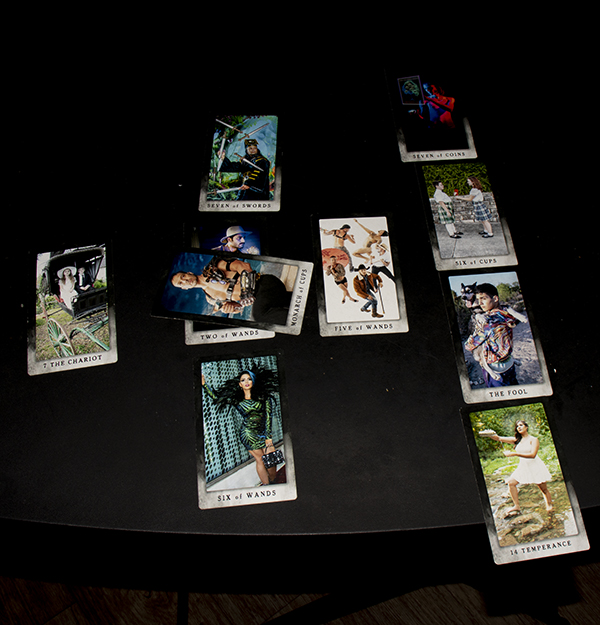